Bradford College deliver BSc (Hons) courses in Software Engineering and Networking Infrastructure and Security (among other things) and are part of the AWS Academy program. I had the privilege of visiting the team behind the courses and an opportunity to see their recently refurbished teaching rooms to put our discussion in context. A big thank you to Elvir, Maroof, Matthew, Sophia and Zainab for their kind hospitality and open discussion.

The Jisc/Bradford conversation started back in May when Elvir contacted us to find out if we could help with remote access options. We booked Bradford College in for an AWS Guided Onboarding workshop, focussing on virtual desktop infrastructure (VDI) products, specifically Amazon AppStream 2.0 and Amazon WorkSpaces. We kicked off with a series of Microsoft Teams based sessions in September. In these initial sessions we first looked at AWS networking, including setting up a simulated on-premises environment running Active Directory. Next we gave an overview of WorkSpaces and AppStream 2.0. Finally we spent some time discussing Bradford’s pain points and how these and other AWS services could be used to address them.

At this point we paused the workshop to give the team time to explore the products and accumulate some real-world costs in their account. At the same time I wrote up the workshop and provided an options paper.

Fast forward one month… The last workshop session was delivered face to face in Bradford. Based on the tour of the teaching environment and discussion of the options paper we identified two areas to focus on:

With the former we considered VPN options routed through AWS or on-premises. We also discussed how WorkSpace instances running in a VPC could be used to bring the desktop UI access into the network. This gave the team enough to work through and decide their next steps.

For the latter we discussed that a number of services could be used. In my options paper I broke the problem down to two parts – a known desktop environment and a deployment environment. 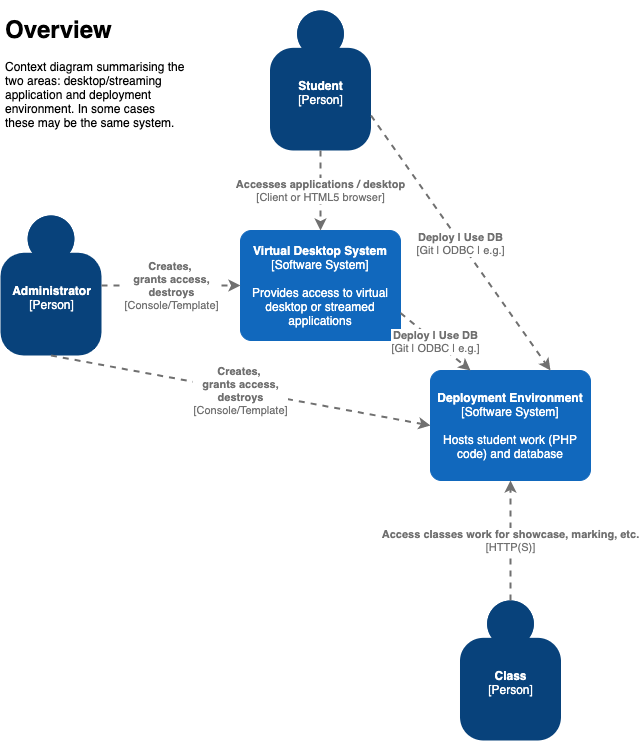 Earlier in the virtual sessions we discussed using AppStream 2.0 or WorkSpaces for the known desktop. WorkSpaces could also be used as the deployment environment – a setup that mirrors the student laptop, built from a known image with applications pre-installed, accessible from anywhere and avoiding issues of unknown states of student devices. However, we ran into problems getting WorkSpaces to work over Eduroam. This also looked to be the least cost effective option.

As an alternative approach, I suggested moving the deployment environment away from the student laptops (getting the required services to run Apache and MySQL was the main blocker with unmanaged devices). Instead students could deploy their code (via a Git repo and CodePipeline or simply via SFTP) to an EC2 instance running the LAMP stack – either one per student or a single staff managed instance.

Watch out for my thoughts on how that might work in a later blog.

In the afternoon we took a moment to consider the costs accrued during the GO workshop. Bradford hope to use this real world usage data to inform their financial planning. I was lost in the moment when Elvir pointed out my train was due and I really should get going…

It was a successful end to a successful workshop. We set out to help Bradford College learn more about AWS VDI products, identify possible costs, and outline some deployment options. We met these objectives and then went beyond expectations to provide insight into connectivity options for remote access to teaching hardware and discussed deployment environments for software engineering classes.

Thanks again to the staff at Bradford College for a wonderful and informative day – I learnt so much from speaking with you.

The AWS Guided Onboarding (GO) programme provided AWS credits and access to Jisc AWS Solution Architects (SAs) at no cost to Jisc members. Unfortunately the AWS GO programme has been discontinued. However, if you have a project or proof-of-concept that you would like to explore with us, we have other AWS partner funding opportunities available so get in touch!

Finally, don’t forget that services from all the major cloud providers are available via the OCRE Cloud Framework, typically at a significantly discounted price. Jisc is the AWS OCRE reseller for the UK. If you want to know more, please talk to our OCRE team on 0300 300 2212 or via email to cloudframework@jisc.ac.uk or talk to your Jisc account manager.